My visit to 5Pointz Graffiti #HipHopEd

I feel extremely fortunate to have visited 5Pointz (http://5ptz.com/) 2 weeks ago.  Getting there just a week before they painted over each masterpiece, which is a crime in my eyes.  See before and after photos http://globalnews.ca/news/978634/before-and-after-photos-of-new-yorks-historic-graffiti-mecca-5-pointz/

Graffiti is a great art form that often doesn’t get the same respect as traditional art.  Often graffiti is associated with tagging or teenagers spraying a quick picture or signature on someone’s property but this wasn’t what 5Pointz was.  Considered a Mecca of graffiti by many, it is unfortunate these pieces were covered and the building will be destroyed.

During my one day adventure of NYC, I attempted to go to all 5 boroughs in 1 day.  I did it, extremely tired, but made it.  I was walking over the Queensboro Bridge and through the Queensboro Projects and noticed a large amount of gentrification going on, similar to Regent Park in Toronto.  Its close proximity to Manhattan makes this area attractive for developers.  I wasn’t sure where the subway was and asked a couple where it was.  They said they were walking that way and would walk with me.  We started talking about me being in NYC for a Hip Hop Education conference and that I was looking for Hip Hop landmarks to visit.  They said they were going to 5Pointz, I was extremely lucky to bump into them as it wasn’t on my radar.   From an educational standpoint, there is so much to discuss about 5Pointz, from graffiti’s inception to the culture that it has built up, infused with equity issues. 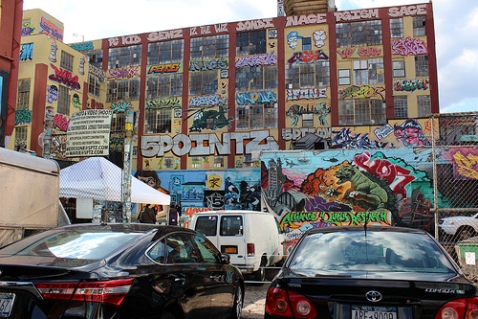