I was offered a spot to take place in a project with Global Teenager Project (GTP http://www.globalteenager.org/) with my science class this semester from my Vice Principal and Anita Townsend representing GTP.  The project uses wikis, learning circles and research to answer global questions.  Our theme was the environmental sustainability and we were in a collaboration with Kenya, two other Toronto schools, Liberia, Ghana, two from Romania, and Hungary.  Students first introduced themselves and shared information about their community and culture.  The main mode of communication was on a wiki.  This allowed for a fluid and collaborative platform.  Questions were formulated by each group that were later to be answered by each country.

Upon emailing the Chavakali High School, we decided to try a Skype video call between the students to introduce each other and then have a further session to discuss our questions revolving around sustainability.  Ms Sugai is the teacher in charge of the tech club who is from JICA (Japan International Cooperation Agency).

The Skype session was one of the most engaging activities I have seen students participate in.  Both groups high school students realized how similar they actually are, including school, sports, music tastes and food.  We also shared our traditional aspects of our cultures that each group had a rich diversity and strong interest in each other.

This laid the foundation for our next session where we will go in more depth about environmental sustainability.  This is such an amazing way to view the environment as a global issue.  Students can see that students in another continent are concerned about the environment and are just as worried about the health of our planet.  The youth are the next wave of people to make a major difference as they can educate their parents, make smarter choices now and develop a way of life that is sustainable. 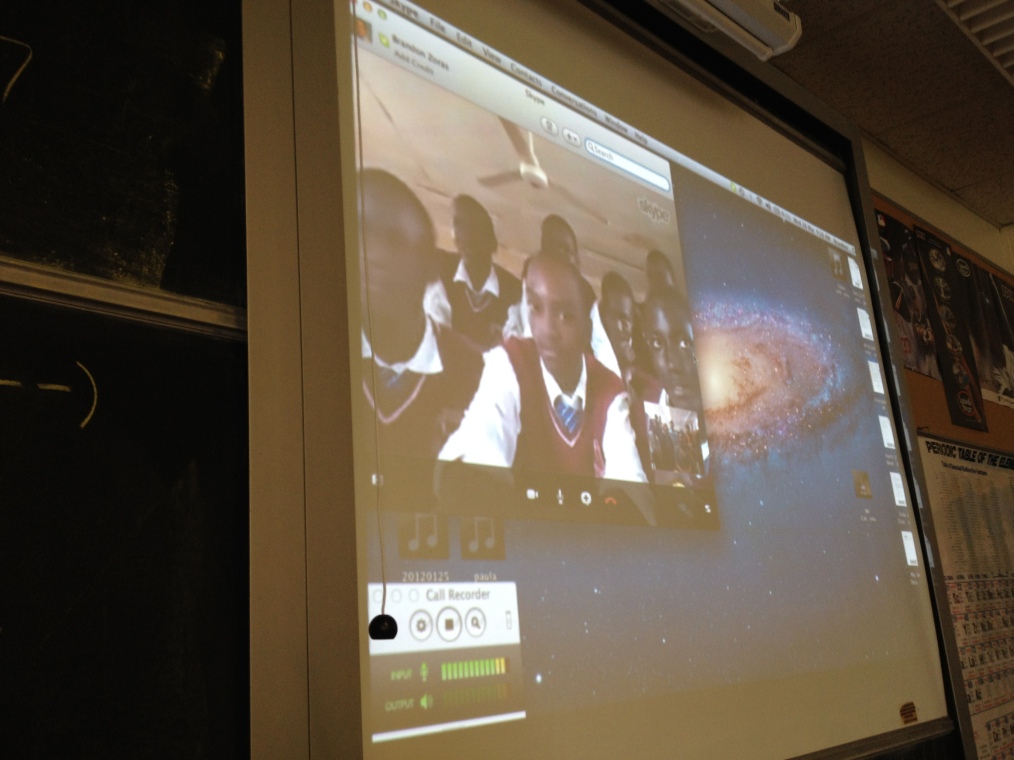 This documentary was an eye opening film that all teachers, parents and students should see.  I got an email from my principal that Alliance Films and Cineplex was offering a free screening for teachers.

First off, the movie is very sad, the theatre was overflowing with tears.  The movie takes you through the lives of victims and their families.  The film starts with a heart breaking story from a father of a boy who took his own life due to the constant bullying at school.  It then takes you into the loves of kids who are constantly victimized.  From 11 year old kids who take their own lives due to the torment and constant bullying to the kids still living day in and day out who are bullied.  One girl was bullied so badly she brought a gun on the school bus to scare off the bullies.  The excuses from the school boards, principals and superintendents in the documentaries were heart breaking.  The movie is just a starting point and should mobilize all viewers to get out there and do what is right.  Support campaigns, stop bullying when it is being done and not to bully someone yourself.

I am so glad that my school is very supportive and the TDSB has a zero tolerance stance.  At school they look into cyber bullying and all forms of physical bullying.  With social media expanding we have bullying on Facebook, Twitter, YouTube and other websites.  I am happy to say our admin really combat that as well and help those in need.  I can’t say it doesn’t happen in our school but I will not stand for it and I do everything in my power to stop it.  Simple name calling is the main form I witness and will not tolerate it.

I was bullied as a child on multiple occasions and the worst feelings were not the words or the physical attacks but I can still remember a teacher laughing when I was being bullied.  Someone you trust and hope is there to protect you is really joining in when they don’t say anything to stop it.  We need to put an end to this, encourage our students to be positive and help those in need.

I encourage everyone  to see the movie or check out the resources and take a stance to end bullying.  On that note April 11th is Day of Pink to end bullying and homophobia, so lets start with that.  I will be wearing pink this year again!

The OISE Dean’s Conference was a valuable conference that gave a space for graduate students to showcase their work.  It was inspiring to see the amount of researchers and breadth of research topics discussed.

I was partnered with three others in a science themed conference.  Lydia Burke looked at perceptions of the western science teacher in a post-colonial context, Darren Glen Hoeg presented on social structures in science education and teacher identity and HyeRan Park presented on the relationship between students’ understanding of nature of science.

With a 15 minute limit, it was hard to get into the entire picture of my research but it was a great opportunity to showcase my findings thus far.  To summarize my presentation I have attached the Power Point presentation slides as a PDF.

My rationale for this project was based largely on the fact I am an urban science educator.  I see on a daily bases what happens in schools and classrooms.  I noticed many males are not taking science passed grade 10 science in inner city schools.  I wanted to find out then what was happening as I believe science to be very important in school, the work force, post secondary and being scientifically literate.  Interviews were based on 18 males from two inner city schools in Toronto.

Briefly, the findings showed that the applied level students were passing at a lower rate than academic students.  The averages of the students interviewed in their grade 10 science course was 54%.  According to the Ontario Science Curriculum (2008) a mark between 50-59% letting them leave science with “limited understanding of facts, concepts and knowledge” as well as “limited ability to problem solve, transfer knowledge, use critical thinking and make connections to the community”.  Sadly students are taking this last science course and not becoming scientifically literate citizens.

My dream is not to have everyone in science, I want everyone to understand it.  A mechanic can not take science after grade 10, but I would like them to understand the chemicals they are working with, and recycle oil and harmful products.  A businessperson making large purchases or company decisions would hopefully understand the environmental impact of their decisions.  As well someone diagnosed with a disease could have a better understanding and not tricked by pseudoscience and miracle cures.

I also discussed what the students thought a scientist looks like.  Over 80% of the students mentioned: scientists are often white older males.  When you Google scientist, you get the same pictures so we need to change the perceptions so that students realize scientists do look like them.

To keep this short, my main implications are to remove barriers, include cultural content and indigenous science, positive teacher-student relationships, give student ownership, more inquiry lab activities, and have community integration.

Fun demo we did in my grade 9 class last week. This was a hook to chemical reactions. We talked about how some reactions happen pretty slow but can be sped up with a catalyst. Here we used potassium iodide with hydrogen peroxide (30%) with some soap and food colouring. 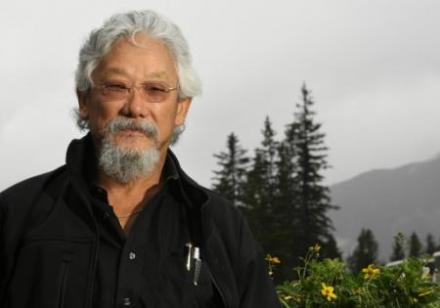 What an amazing evening!  Going to UTSC (University of Toronto, Scarborough Campus) to see David Suzuki speak was mind blowing.  His words and passion filled the lecture hall.

Aleksandra Nasteska (@aleksandrarocks) representing We Canada (@wecanada), and Earth Summit engaged the crowd with information about the Earth Summit taking place in Rio in a few months.  She discussed many issues as Canadians, we need to work on to create a sustainable planet.   She spoke of the importance of young people to stand up and demand change from the people in power that are exploiting the Earth.   Those that are using up resources, polluting our communities are leaving nothing to future generations.

Suzuki wasn’t concerned about the Earth as he stated it was here long before us and will be long after us.  His concern was for the biosphere and the health of all living things on our planet.

A question was asked at the end of the night about what jobs we should go into to stop climate issues.  He made it very clear that we need people in all industries, we need mechanics, we need researchers as well, but whatever profession people do look at it with a green / biocaentric lens.  As a mechanic you can recycle oil, maintain vehicles, and look into cleaner cars.  All jobs are important.  I think as educators we need to look into this.

He also disagreed with the post secondary system in that we are too tightly streamed into categories of either arts or sciences.  We need to fuse them and as teachers we need to embed the environment into all levels of curriculum.  The David Suzuki curriculum is looking to role out more environmental curriculum that prepares students with science literacy.

Great Quotes From The Evening:

“If we back off & give nature a chance maybe she will surprise us. That is my hope”

“Water is like Air, we are glued together through these elements. We are the Earth and the Fire.”

“We need to live more simply and focus on community”

“…the monster has landed and it’s us”

“Nature may be far more forgiving than we deserve”

“Capitalism, corporations, borders. We invented these abstract constructs. And if we can create them, WE CAN CHANGE THEM!”

I contacted We Canada, as part of their cross Canada Tour to stop into Cedarbrae C.I. to discuss sustainability with us.  The power of social media is amazing as I first heard about them from twitter, Tweeted a couple people @@Earth2Victoria and @aleksandrarocks within days they happened to be in our school auditorium.

Victoria Wee lead us through an engaging presentation in what we can do to develop sustainable practices in our lives, community and country.  She stressed the importance of the United Nations Conference on Sustainable Development that is happening in Rio this year.

During a breakout session Victoria and Aleksandra worked with our Eco Club and asked what was important to the students.  On sticky notes they collected the answers and will be combining them with student responses across Canada.

We only have one planet to live on!  The way we are living beyond our carrying capacity we may not have much to look forward to or our future generations.  Mobilizing youth to get engaged, speak up and take action is our best bet to combat issues such as climate change and work towards a sustainable future. 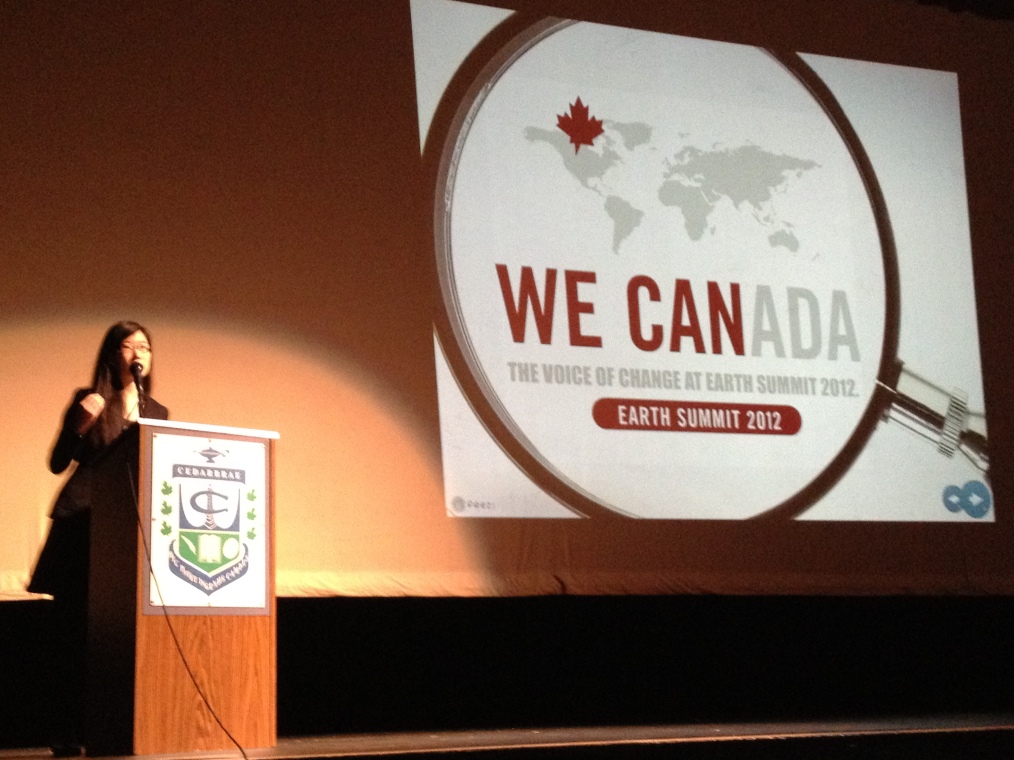 How many Earths do we have? 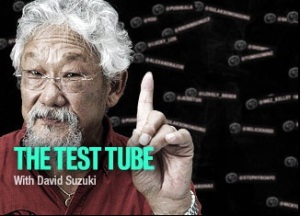