A few weeks ago I attended the Hip Hop Think Tank III in NYC.  It was a great experience! The second day in NYC, I awoke from the Harlem YMCA Hostel (which was a great deal at 55 bucks a night/private room) and got a 7 AM start time.  Walking around Harlem for soul breakfast in the beautiful sun was refreshing.  Walking up to South Bronx, and across seeing many great South American restaurants and residences setting up food and drink stands along the street.  The subway was closed so had to walk back Harlem to catch the Subway down to Central Park.  From there I walked across the Queensboro Bridge which was a super long walk into the Queensboro Projects, where Nas was from.  The area looked so similar to Regent Park in Toronto due to the rapid gentrification of the area.  When Manhattan is busting at the seams, expansion into parts of Queens is happening.  From there, I walked down to the 5Pointz Graffiti Centre  and then took the subway down to Marcy Housing, where Jay-Z was from.

The housing area there looked similar to Toronto public housing but at a larger scale.  You could see community projects like gardens and murals that have faded away, but most noticeably were the closed down stores, garbage lined streets and lack of quality places to purchase food.  I didn’t see access to supermarkets/grocery stores or community centres along my route.  It was not until I walked down to see the ODB mural, I noticed, again, the area start to gentrify.  Notorious BIG childhood home was in a very nice area, with cafes, speciality bagel stores and assortment of vegan eateries. This area situated right by the Barclay centre, where I stopped for a drink at the Starbucks that overlooks the practice court of the Brooklyn Nets. The weather was getting bad so I hopped onto the subway.

I emerged from the subway in Manhattan and found the fire hall that Ghost Busters was filmed at.  I decided to walk down to Ground Zero and waited in line for the 9/11 Memorial.  The lines were long and security rivalled that of an airport, as people were searched, bags x-rayed and identification was checked. The memorial was silent, almost like time was standing still.  I noticed yellow roses in some of the names along the memorial. It wasn’t until I got across to the second tower area where a sign read that a yellow rose is put on the names who’s birthday it was that day.  Suddenly my mind exploded with shock and sadness, it really made the names become more than just names surrounding a pool of water.  People have birthdays, not names on stone,  and to see how many people would not be celebrating their birthdays that day was saddening.

After that, I walked down to the Staten Island Ferry and hopped on a ferry to catch a glimpse of the Statue of Liberty. It was a great view of NYC skyline as well, to see the Statue of Liberty first hand was great. It was dark by the time I made it across and I had to catch my 10 PM bus back to Toronto.  Arriving back in Manhattan, I went to Wall St and the famous Charging Bull, which had its own Police Officer watching for people climbing on it.  Up to China town, I went to get dinner and some bubble tea, it had the same feel as Toronto’s china town with street level open markets, food everywhere and people offering knock-off name brand clothes, watches and purses.  I had to make it back up to the bus terminal, so took the subway up to Grand Central for some touristy photos and walked along to the New York Public Library, an outdoor skating rink and then Times Square.  Time Square looked busier and way more flashing signs than I had remembered seeing 9 years ago.  I got changed into some more comfortable clothes, found a Starbucks so I could say I tried a Trenta sized drink and boarded my bus and was on the long bus ride back to Toronto.  A well worth it trip! 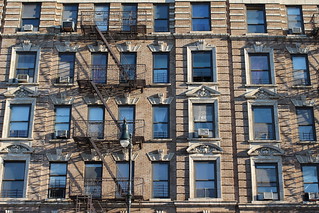