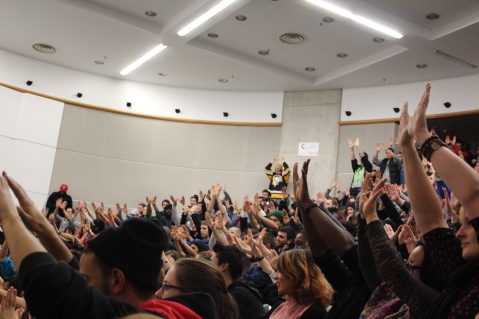 The jammed packed hallways of U of T were filled with Wu fans from elementary students that came with their parents to adults who grew up listening to GZA. Project Freedom started off the night with a documentary about their program.  A grassroots program that helps students learn in a non-traditional method. Many explained that the traditional ways of learning in straight rows to a curriculum that does not reflect their own backgrounds and cultures is difficult. Project Freedom works to make a more inclusive curriculum and increase student success.

Dr Stan Dolye-Wood of University of Toronto gave a very powerful and moving opening to what is consciousness.  It was not only his words but the feeling he put in, he had the packed lecture hall mesmerized.  He talked about the lived experiences of many and how we get many messages passed through us both formally and informally which shape our consciousness. He spoke of the importance of Hip Hop and how consciousness is embedded in the production for the rapper as well as the listener.

GZA came out to a crowd with all their W’s in the air.  He spoke softly, a humble voice, for his introduction, as lecturing at a University is something he isn’t accustomed to, but the passion was in his words. He spoke of how it all started and announced it is ODB’s birthday today (original Wu-tang member who has passed away). He spoke about growing up and always being interested in science.  Like many children, experiences with science start on their own and not in the classroom.  Kids battle gravity, notice that things fall down, GZA spoke about wondering why some metals were magnetic and others were not.  He had a natural curiosity to understand science.  He talked about sound waves and how they are present not only in music but waves are still bouncing through the universe of sound and light from the big bang. He talked about the Science Genius project with Dr Chris Emdin and Rap Genius to get students from inner city schools to learn science through hip hop. He stressed that Hip Hop should be for everyone and that artists are limiting themselves by making music for only one kind of person.  By putting an explicit lyrics sticker on the album, that limits people from hearing the music. That being said, violence is still a part of many people’s lives and to rap about that is ok, it is a lived experience of someone. Not to be confused with promoting violence but if you live in an area with violence and are exposed to it.  His next album entitled Dark Matter will be releasing next year.  The album will have a science focus and meant to reach youth and adults.  GZA has been visiting professors at MIT and Neil deGrasse Tyson to discuss astrophysics.

In his closing, he wanted to reinforce, no matter where you start out in life or career you are in, do not stop learning about yourself and the universe both physically and metaphysically.  GZA also wanted to people to leave their comfort zone as it enabled him to make new friends, colleagues and given him tremendous opportunities.

One response to “GZA and Project Freedom, University of Toronto”